Welcome to the Log-book. Scroll down to read the data from the different episodes.

Kay and Thor ventures out from KajakHotellet at Amager beach – Copenhagen. They haven’t planned where to camp for the night, but will cross over to Sweden and hopefully find a suitable spot.

Tip of the day:

“When venturing in to an indian territory – bring your own liquor” – That applies for sweden as well. The Swedish alcohol policy is quite sharp, and all spirits above 3,5 % can only be bought in government run stores, called: Systembolaget. Hence remember to top up that flask and bring an extra bottle of Islay.

Is a diving duck. Swimming under water in search for fish and crustaceans, as well as insects and amphibians. It can be found in coastal waters and in-lakes across most of the northern hemisphere. It resembles it’s bigger cousin; the Common Merganser, but The Redbreasted Merganser has a much more modest beak-hook.

Male (in breeding plumage) and female. 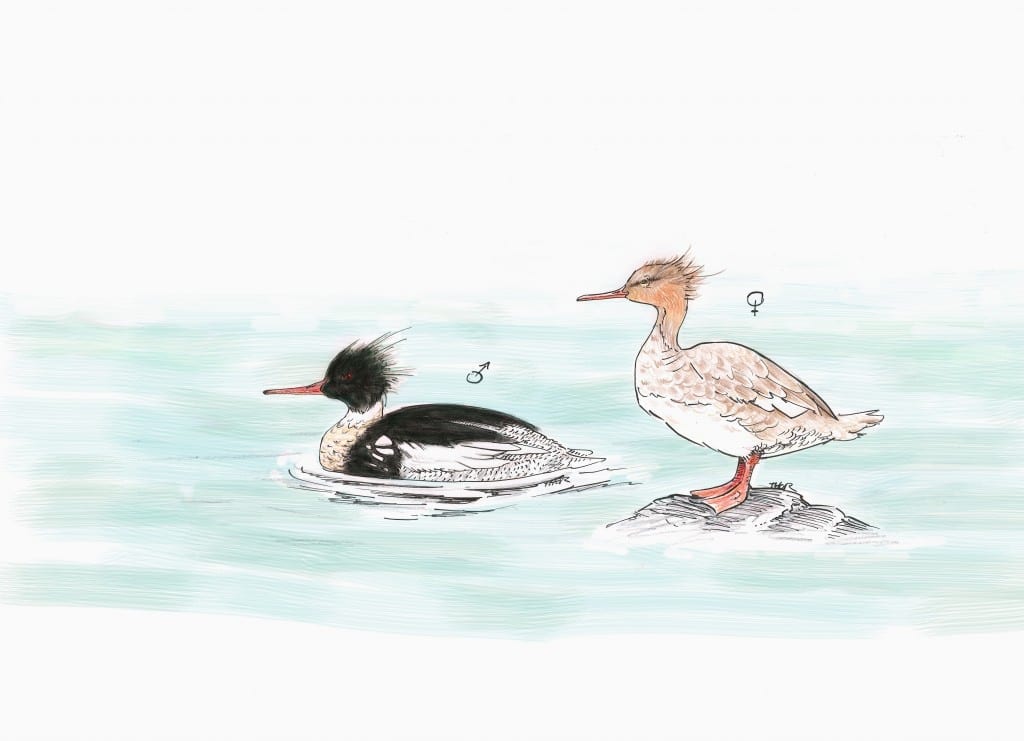 Bornholm is the eastern most island in Denmark (besides Christians ø, a small patch of rocks about 9,5 nm NE of Bornholm) The island is known for its beauty, and it has a very interesting story that we’ll talk about later…

Bread. We love to bring rye bread on our trips – pre sliced. To protect the bread from being mashed, you can make a cardboard box for it.

The box can be cut down as the bread gets eaten. The cut offs can be used for kindling.

Air dryed Sausages from the southern parts of europe is excellent food for extended trips. Keep them dry and let them air in the tent at night.

The Grey seal can grow to 2,5 meters in length and wight about 230 kg.

Its not uncommon for Grey Seals to swim up to 1500 km in a month!  In Denmark the seal is still considered uncommon. But there is an estimated population of 5000 individuals in the Baltic. They also inhabit the shores of Noway, the Faroe Islands and the east coast of North America. But there is nowhere the Gray seal is more abundant than on                    the British Isles

Carbonara – in one pot.

This may not be the most elegant dish, but it’s fast, tasty and cheap.

This progress can be used with many different instant mixes, and salami can replace bacon and so forth. Make your own classic blend.

In Smyghuk we also encountered an ”Åla-Lotteri” – translated: Eel Lottery. It is a very common thing in the southern part of Sweden. And the name says it all. Instead of pink teddy bears and plastic tokens you can win smoked eel, fish and coffee

Smyghuk is the southernmost point in Sweden, and part of Skåne county.                         Since ancient times Skåne was actually a region in the kingdom of Denmark. It wasn’t until 1658 that the Danish throne hat to surrender Skåne to the Swedish throne. But there are still patriots that wish to part with Sweden, and there are even a yearly gathering where Skånish people meet to dig Skåne apart from the rest of Sweden. 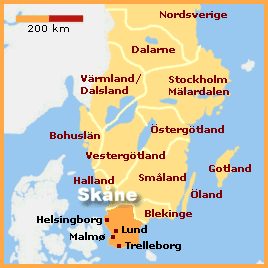 The orange part is Skåne. Bornholm is the gray dot.

The flag of skåne is a mix of the Danish and the Swedish flags.

I had been working intensely on finishing my first Kayak-film while prepping this trip. And at the same time I had full time job.  When we launched for Bornholm I thought it would be a welcome vacation, but filming, uploading and updating the blog left little space for relaxation – Paddling was the easy part. It helped talking it over with kay. He was a great support and took over a lot of the camera work.

The day it all culminated, I experienced something I had never tried before. It felt like going in to a dark spiral of despair, that I could not get out. I have always been able to focus on the positive when the going got tough, but here there was only darkness – very scary!

What I learned from this whole experience was, that it is important to give one self a break and prepare properly, before jumping in to a new project. It helped me a lot realizing that it was I that was in control, and I could do what ever I chose to do with the film project. My worst enemy was the expectations to myself.

Today I consider the day of despair one of the greatest, and most valuable experiences of the trip. 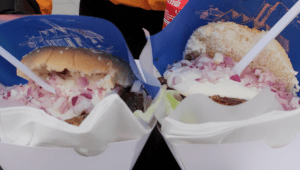 The storm from last night had created big swells. The wind was westerly and helped progress as we crossed the bay of Ystad. We made the big mistake of not going ashore for water before the crossing. On tour i normally have a 4.L. Waterbag in my day hatch additional to my daily ration. But I guess that we were a bit too cocky that day. It could have been a big problem if the wind was northerly and we had drifted to sea.

“Danes don’t know how to open a Ritter Sport. You should break it across the middle of the back. Then break it the other way. That gives you four equal squares, all easy to access. Quadratisch, Praktisch….”

About this episode.
The crossing described in this episode has been modified a bit to suit the storyline.
Don’t worry we did paddle all the way. But the first harbor we arrived to was Helligpeder, after 7,10 hours at sea. We had a late lunch break there, and then we continued up the coast to Vang.
We had the perfect conditions for the crossing, the most challenging factor was the big irregular waves that suddenly would sneak up on you. We guess that they were created, by the High speed ferry running down south from Ystad to Bornholm.

There was a bit of ships in the shipping lane, but we were only on collision course with one.

As said, we had spend all our time waiting in Sweden. That ment that we only got two days on Bornholm before we took the ferry back. 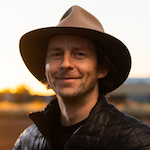 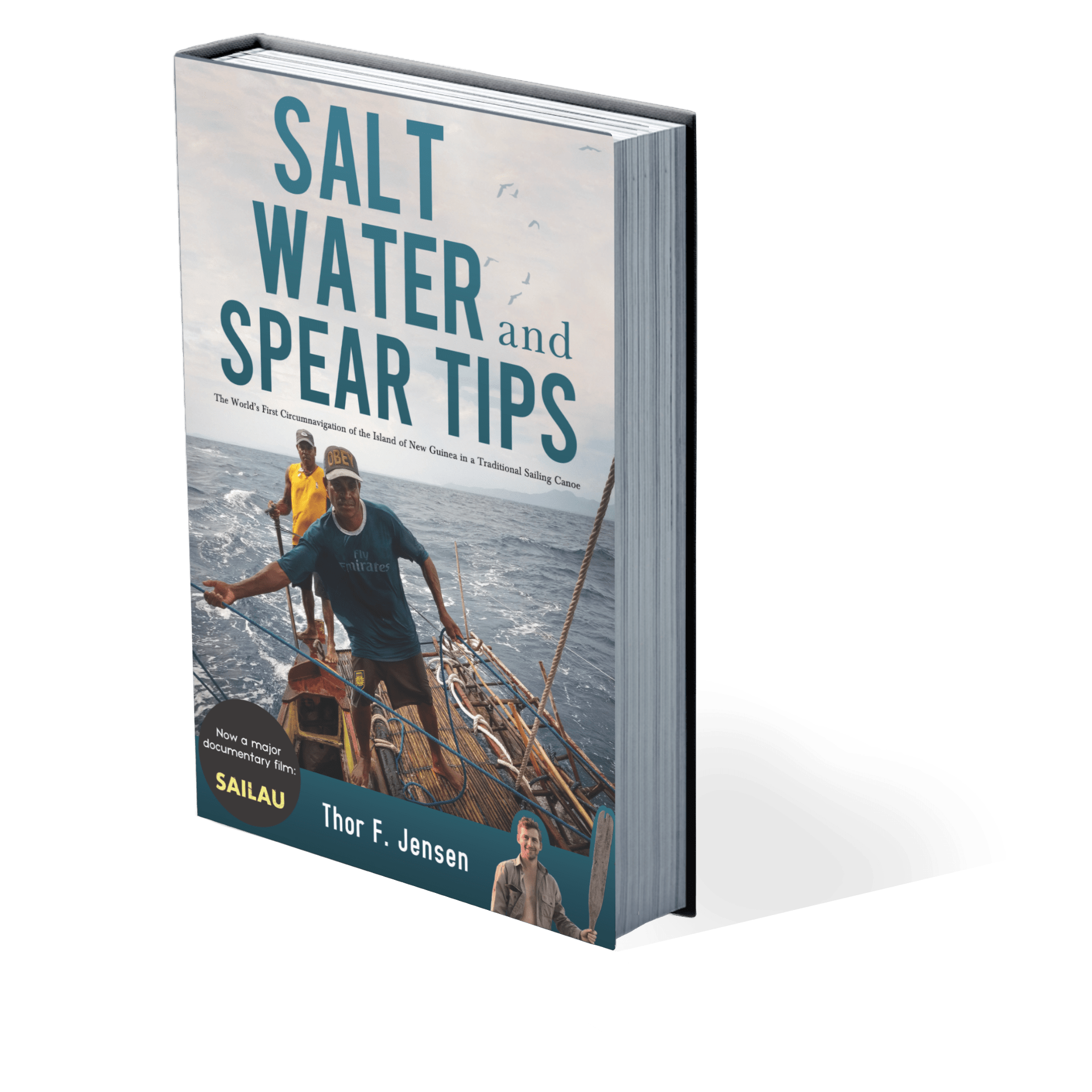